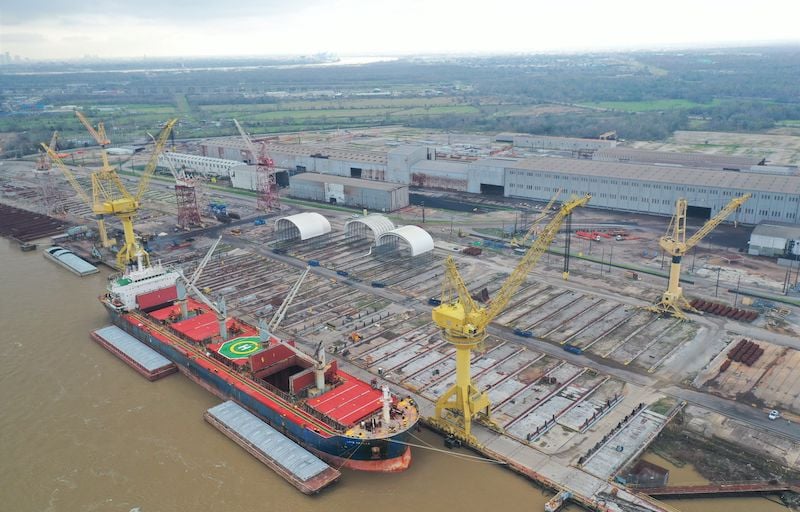 NEW ORLEANS — On Oct. 7, T. Parker Host announced the grand opening of the former Avondale Shipyards as Avondale Global Gateway, a logistics hub for intermodal commerce. “I am proud to be part of the Host team that took on the herculean task of transforming the former shipyard upon our acquisition in 2018,” said Adam Anderson, the company’s CEO, in a press release. “We have taken a site with great bones and repurposed it into a working, world-class multi-modal terminal with fully operating docks, working buildings and rail access at the site for the first time in half a century. Renaming the site to Avondale Global Gateway better represents what Avondale is now and will become as we continue our efforts.”

Host touts the complex’s access to river, road and rail connections and its ample storage and laydown space, meaning areas used for the temporary storage of equipment and supplies. The site has 300 acres available for development on or near the shores of the Mississippi River and 1.5 million square feet of convertible warehouse or manufacturing space, including indoor and outdoor Foreign Trade Zone storage.

Here, from staff and wire reports, are more of the week’s top business stories:

On Oct. 6, attorneys for Metro Service Group Inc. filed for Chapter 11 reorganization in federal court in New Orleans. The beleaguered trash hauler serves approximately 73,000 homes in Lakeview, New Orleans East, the Lower 9th Ward and Gentilly. The company said multiple grievances with the City of New Orleans led to the action. “Metro’s filing was necessary to protect its contractual rights, as well as the rights of its employees and creditors,” said a spokesperson in an Oct. 6 press release. “Any prior service disruptions under Metro’s contract with the City were the result of the pandemic and Hurricane Ida (force majeure), both of which were declared emergencies by the Mayor of the City of New Orleans. … The administration’s inability or unwillingness to address those emergencies led to this filing.”

A Louisiana Economic Forecast unveiled Tuesday shows all of the state’s metro areas are expected to add jobs over the next two years, which will help boost the state’s slow recovery from the COVID-19 pandemic. Louisiana State University economist Loren Scott presented his predictions for the state’s economy in 2023 and 2024 at an event in Baton Rouge on Tuesday. Scott presented the Louisiana Economic Forecast for the Greater Baton Rouge Business Report in conjunction with the Louisiana Business Symposium. Scott contends Louisiana is well positioned to weather a national recession with significant job gains over the next two years, driven in large part by industrial construction, new health care facilities and Amazon distribution centers. (From the Center Square)

Lee Michaels Fine Jewelry has moved from the inside of Lakeside Shopping Center to a new 10,400-square-foot freestanding store located on Causeway Boulevard in front of Dillard’s Department Store. Now open for business, the store now has one entrance for fine jewelry and another for timepieces. The interior design features walnut cases trimmed in marble, hand-painted wallpaper and lots of gold and gray tones. There are areas dedicated to “shop-in-shops” from Rolex, David Yurman, Tudor, Roberto Coin, Tag Heuer and Mikimoto, as well as offerings from Marco Bicego, Temple St. Clair, Lagos, John Hardy and Ippolita. The new space features an expanded bridal counter framed by hand-painted butterfly wallpaper, a watchmaker shop, a customer seating area and several beverage stations. In business since 1978, the retailer’s second generation of owners includes Ryan, Scott and Chad Berg.

In a recent issue of The Atlantic, Derek Thompson wrote that there “is a growing American tendency to be catastrophically gloomy about the direction of this country, even as we’re resiliently sunny about our own household’s future.” I’ve observed this phenomenon while producing the Gulf South Index, a recurring report about what people believe, choose and buy in this region. Even when the world outside looks like a total mess, people here remain positive about their own lot in life. The closer we get to our own driveways, the better we feel about the world even if, from 10,000 feet, it’s tough out there. Over the course of the year, consumers have reported numerous lifestyle changes to accommodate rising prices everywhere. Resonate reports that, as of June, 28% of consumers cut out some non-essential purchases, and almost 24% have eliminated all non-essential purchases. People choosing to go out less increased by 13%. Those buying cheaper brands jumped 12%. (From the Gulf South Index)