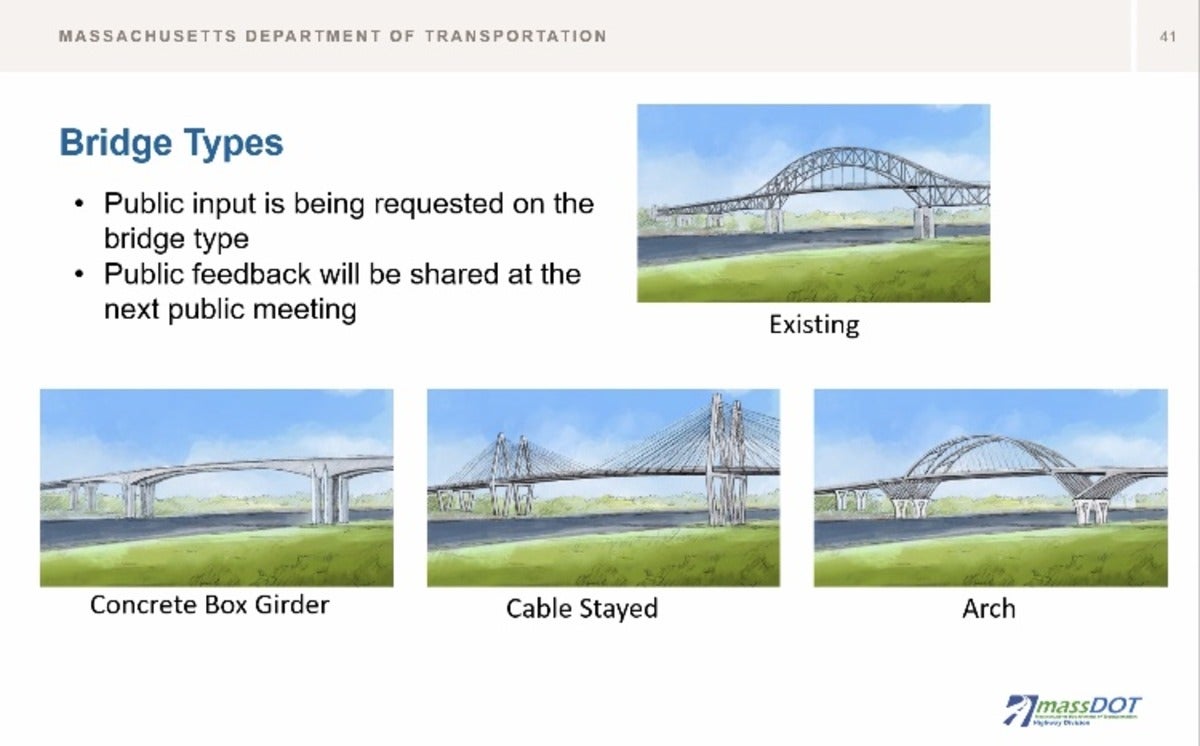 Traveling to and from Cape Cod will look a lot different over the coming decade. The Bourne and Sagamore Bridges, both built in the 1930’s, are set to be replaced in the years to come.

While construction is not scheduled to begin for a few years, officials revealed the latest information surrounding the project at a public information meeting Tuesday night. They outlined the different types of bridge designs that could be built, and indicated in which direction the project will likely go.

Each existing bridge, according to multiple Massachusetts Department of Transportation officials who spoke at the meeting, will likely be replaced with two new side-by-side bridges.

A plan to create twin bridges at each location would be ideal for a number of reasons. First, it would eliminate traffic from the existing, flawed structures as soon as possible. The plan would also best maintain traffic flow and local connections during construction. Twin bridges are structurally more efficient and have a shallower structural depth than one single bridge, according to officials. On top of that, they are generally easier to build.

A 2019 report by MassDOT found that both the Sagamore and Bourne Bridges have exceeded their design life and require “ substantial regular maintenance to function reliably.” Even if they were in perfect condition, the bridge designs are “substandard” in several ways,” according to MassDOT’s report. Travel lanes are too narrow, the bridge lacks road shoulders, and accommodations for cyclists and pedestrians are minimal.

Twin bridges maintain traffic flow well because of how they are constructed, MassDOT officials said at the meeting. As the first bridge is built, traffic would be uninterrupted on the existing bridge at each location. Then, two-way traffic would switch to the new bridge as the old bridge is demolished and a second new structure is built. Finally, traffic in one direction would move to the other new bridge. When the twin bridges are complete, each would have two lanes of traffic moving in the same direction, as well as breakdown lanes, an entrance/exit lane, and a shared-use path for pedestrians and cyclists, officials said.

Representatives from MassDOT and the Army Corps of Engineers appeared set on the twin bridge course of action. What remains to be decided is the types of bridges that will be constructed.

Officials laid out three feasible options: a concrete box girder, a cable-stayed bridge, and an arch bridge. No final decision was made, but they said that all analysis right now points to an arch bridge design being the best solution. MassDOT is soliciting public feedback now before committing to a design.

Arch bridges would best replicate the look and feel of the existing structures, including the iconic “gateway” view that greets people as they cross the current bridges. Similarly, the design would likely be most consistent with historic context and avoid any adverse effects on the Cape Cod Canal historic district, officials said.

Arch bridges have practical benefits as well. Of the choices, they are best able to accommodate ramp connections, and would have the smallest footprint on either side of the canal. Construction would be relatively simple. The arches themselves could be built offsite to avoid traffic, and weather-related complications during construction. The ends of each bridge would be built onsite, and the middle sections, or arches, would be brought in and placed using a barge on the canal. Workers would only need good weather for a day or two as the arches are installed.

A concrete box girder does not offer the “gateway experience,” officials said. It would have to be built higher, and thus require landing points further back on each side of the canal, increasing the impacts on traffic and residents. This type of bridge is also more restrictive when it comes to roadway design, and concrete work would be difficult in winter months.

MassDOT also explored the option of building cable-stayed bridges, similar to Boston’s Zakim Bridge. This would also be a significant visual departure from the look that has dominated the Cape Cod Canal for generations. A cable-stayed bridge could run into complications with the historic district, officials said, and would be more susceptible to wind and extreme weather during construction.

While significant progress has been made, officials said they don’t expect construction to begin until 2027. The work itself could last six or seven years.

Hochul and Zeldin to debate Tuesday after weeks of ‘chicken’ taunts in NY governor’s...

Ravens’ mascot carted off at halftime with apparent injury

Microsoft says it will bring Call of Duty to Nintendo for...