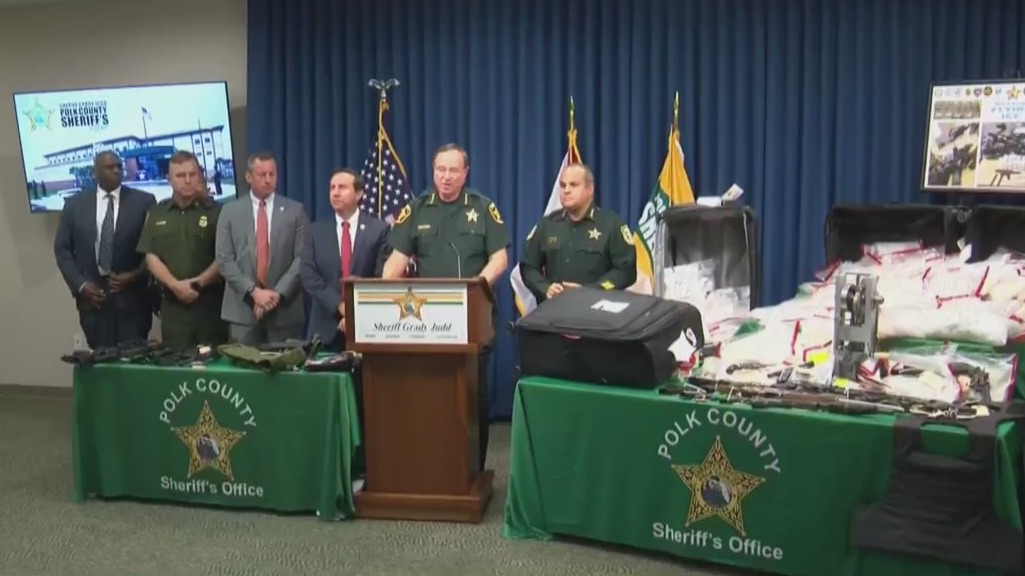 TAMPA, Fla. (WFLA) — Authorities say 85 people were arrested after they dismantled an international drug trafficking ring that was operating out of Winter Haven.

The Polk County Sheriff’s Office said the investigation began in Sept. 2020. Around the same time, deputies said one of the suspects, Demarcus Terrell Jefferson crashed his vehicle into a gas station and killed a person inside. While investigating the crash, authorities got word Jefferson and some of his family members had helped smuggle large amounts of meth through airports in checked luggage.

Undercover detectives made multiple drug purchases at his home, and learned one of his brothers’ died of a Fentanyl and Xanax overdose at the residence.

“Drugs continued to be sold by family members after his death,” the sheriff’s office said.

Sheriff Grady Judd said his detectives continued making undercover narcotics purchases from dealers in the Winter Haven area and began working with local, state and federal agencies across the country.

In Feb. 2020, they received authorization to conduct a wiretap investigation so they could monitor the activity of suspects in the ring. While intercepting a call, Judd said detectives heard chatter about a homicide that occurred in Winter Haven, which is still under investigation.

Investigators said the ring smuggled large amounts of illegal narcotics from Mexico into Los Angeles, and then transported the drugs via domestic flights from Memphis, Tennessee to Orlando, Florida. The drugs were then taken to Polk County by ground.

Judd said one one occasion they were able to smuggle six suitcases containing drugs on a domestic flight from Los Angeles to Orlando.

“They didn’t as so much as throw a pair or underwear in the suitcase to act like they were hiding the drugs,” Judd said. “You think LAX has got a drug smuggling problem at the airport? I believe that they do, and they need to address it ASAP.”

In another instance, 94 pounds of methamphetamine and 48 pounds of cannabis were smuggled into Florida on a flight, Judd said.

Florida firefighter under investigation after saying ‘who cares’ to officer’s death, report says

News Channel 8 reached out to LAX for comment. An airport spokesperson told us he couldn’t speak on any active investigations and to direct our questions to the Transportation Security Administration (TSA).

The total street value of the drugs is more than $12.8 Million.

Judd said the amount of fentanyl seized could have killed up to 96,000 people.

The sheriff’s office said 85 suspects were arrested and charged with a total of 355 felonies and 93 misdemeanors. Their criminal histories include 690 previous felonies, 712 previous misdemeanors, and 194 felony convictions.

Another suspect, Javarius Samuel, had traveled back and forth from California to Florida. At his Fresno home, detectives found 68 pounds of marijuana, 109 grams of Fentanyl, 14 grams of cocaine, three firearms, and $45,000 in cash. At his Florida residence, they seized two loaded black AK-47 pistols, “which were out in plain view and in a home with six children,” the sheriff’s office said.

One suspect, Vicente Carranza-Basanta told detectives that he was in Lake Wales while seeking political asylum from Venezuela. Judd said detectives had arranged to purchase a kilogram of cocaine from Vincente, and he gave them 1012 grams zipped inside a black leather Bible cover. He was arrested and charged with trafficking in cocaine, conspiracy to traffic in cocaine, possession of a vehicle for drug trafficking and possession of drug paraphernalia.

In April 2021, detectives in Winter Haven arranged to meet Jefferson’s brother, Antonio Deandre Jefferson, to purchase drugs. They placed Antonio under arrest and seized 168.45 grams of meth, a pound of marijuana, and a handgun from his vehicle. Authorities said he continued to traffic large amounts of meth while out on bond and wearing an ankle monitor. He was arrested again in August for trafficking in methamphetamine among other charges.

Deputies said another suspect, Cley Bryan, was busted after two minors stole his vehicle, which had drugs in it. The juveniles wanted to sell the drugs and split profits with a friend. When detectives investigating the theft interviewed Bryan, they found 24 pounds of methamphetamine in his home. Bryan was arrested for trafficking in meth, possessing a vehicle for drug trafficking, and possession of paraphernalia. Two of the juveniles were charged with grand theft auto, and all three were all charged with possession of meth, according to the sheriff’s office.

Officials issued warrants for three other suspects. They were identified as Jesus Barragan-Torres of Sanger, California, Darrion Jacob of Winter Haven and Amanda Paige Wittke of Polk City.

The 18th anniversary is bad news for children awaiting trial