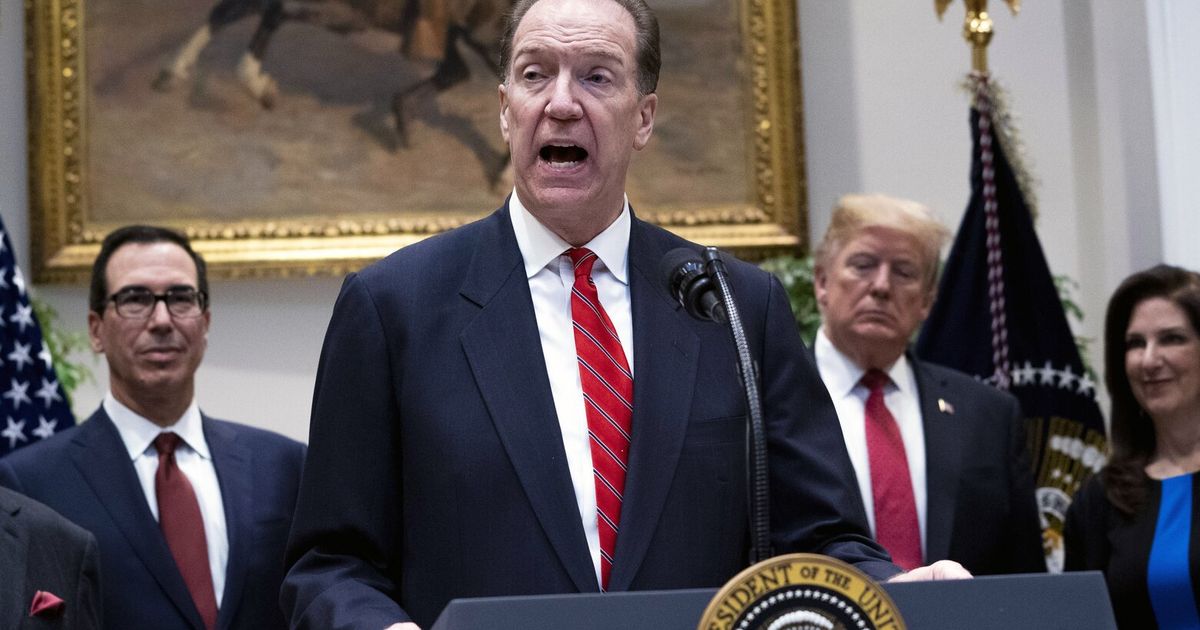 David Malpass catapulted onto the international stage three years ago when he was nominated by President Donald Trump to become president of the World Bank. He was charged with improving the economies of poor nations, many of which are being battered by extreme weather fueled by climate change.

Yet Malpass barely spoke of global warming, careful not to rankle Trump, who famously called climate change a “hoax” and pulled the United States out of the Paris climate agreement.

This week, Malpass’ refusal to acknowledge that the burning of fossil fuels is rapidly warming the planet exposed a debate inside and outside of the institution about whether the bank is doing enough to help nations that are now struggling with devastating floods, heat, drought and other impacts, and whether its financing of new oil and gas projects is exacerbating the problem.

Jochen Flasbarth, a senior economic official in Germany and one of the bank’s directors, said on Twitter “We are concerned about this confusing signals about scientific evidence of #climatechange from the top of @WorldBank.”

The uproar began Tuesday when Malpass refused to say during a public event at The New York Times whether the burning of oil, gas and coal was driving climate change.

Speaking onstage during a discussion about what industrialized nations owe developing nations grappling with climate problems, Malpass was asked to respond to a remark made earlier in the day by former Vice President Al Gore, who called the World Bank president a “climate denier.” Pressed three times, Malpass would not say whether he accepted that man-made greenhouse gas emissions had created a worsening crisis that is already leading to more extreme weather.

The World Bank’s mission is to reduce poverty by lending money to poor nations to improve their economies and living standards. The loan terms are more favorable than those countries could get on the commercial market, often at low cost or no cost. The bank, which is owned by 187 countries, finances a wide range of projects from energy to education to public health. And there’s growing pressure on the bank to do more to help countries facing climate disasters.

Malpass’ appearance Tuesday caused an international fracas. By Thursday, he was working feverishly to restate his views on climate change amid widespread calls for his dismissal.

In an interview on CNN International on Thursday morning, Malpass said he accepted the overwhelming scientific conclusion that human activity is warming the planet.

“It’s clear that greenhouse gas emissions are coming from man-made sources, including fossil fuels,” he said. “I’m not a denier.”

He also sent an internal memo Thursday to World Bank staff members in which he wrote “it’s clear that greenhouse gas emissions from human activities are causing climate change, and that the sharp increase in the use of coal, diesel, and heavy fuel oil in both advanced economies and developing countries is creating another wave of the climate crisis.”

Many experts say the World Bank under Malpass is not doing enough to align its lending with international efforts to reduce greenhouse gas emissions, and is moving too slowly to help poor countries deal with climate impacts. The bank continues to fund oil and gas projects, despite a declaration by the International Energy Agency that countries must stop financing new fossil fuel development if the world has any hope of averting climate catastrophe.

Malpass’ equivocation over climate science quickly became a hot topic in New York, where thousands of diplomats, policymakers and activists had gathered for the United Nations General Assembly and a series of events known as Climate Week.

“It’s simple,” Figueres said on Twitter on Wednesday. “If you don’t understand the threat of #climatechange to developing countries you cannot lead the world’s top international development institution.”

Speaking at an event Wednesday, Mark Carney, who is leading a U.N. effort to get financial institutions to help reduce emissions, echoed Malpass’ comments — but with a distinct twist. “I’m not a scientist,” he said. “But I took scientific advice.”

Scott Morris, a senior fellow at the Center for Global Development, said that the World Bank’s climate agenda had not been impeded by Malpass, but that his remarks underscored the need for a more ambitious approach.

“The best we can attribute to him is that he doesn’t seem to be actively interfering with the path that the bank has been on,” Morris said, adding that there is growing pressure for the bank to do more to combat climate change. “It’s no longer enough that he can simply coast on the performance of his own institution.”

Tasneem Essop, executive director of Climate Action Network International, said the bank cannot continue to pour money into oil and gas projects, as it has under Malpass. “If the World Bank’s mandate is to end poverty, it is incompatible with its continued funding of fossil fuels that is a key driver of the climate crisis impacting on those living in poverty the hardest,” she said.

The fate of Malpass has been a subject of debate within the Biden administration, with some officials wanting President Joe Biden to seek his resignation or to try to orchestrate his removal, and others not wanting to start a new tradition that would mean World Bank leaders are replaced when the U.S. presidency changes hands.

“It is challenging for the Biden administration to simply say this isn’t our guy, we need to remove him,” Morris said. “There’s not much precedent for that.”

The Biden administration would not say Wednesday if it had confidence in Malpass but emphasized that the institution must play a central role in combating climate change.

“We expect the World Bank Group to be a global leader of climate ambition and the mobilization of significantly more climate finance for developing countries,” said Michael Kikukawa, a Treasury Department spokesperson. “We have, and will continue, to make that expectation clear to World Bank leadership. The World Bank must be a full partner in delivering on this global agenda.”

Activists and climate experts called for Malpass to be removed.

“There is no place at the top of the World Bank for a climate denier,” said Jules Kortenhorst, CEO of the Rocky Mountain Institute and an expert on energy and climate issues. “David Malpass needs to step down. The World Bank deserves a passionate leader who fully appreciates the threat that climate change poses to reducing poverty, improving living standards and sustainable growth.”

Malpass’ efforts Thursday did little to assuage his critics.

“At this point, it’s clear he’s trying to hang on to his job after the diplomatic admonishment from the U.S. Treasury Department and other shareholders yesterday,” said Luísa Abbott Galvão, senior international policy campaigner with Friends of the Earth. “Malpass has been making climate-denying comments for over a decade. We cannot have a situation where a World Bank president is saying nice things publicly but working behind the scenes to block action, and that’s exactly what we’ve seen in his three years as World Bank president.”

This story was originally published at nytimes.com. Read it here.

We are Trinidad: Creating a space to create

In the occupied regions of Ukraine, the voting staged by the...